Skip to Main Content
It looks like you're using Internet Explorer 11 or older. This website works best with modern browsers such as the latest versions of Chrome, Firefox, Safari, and Edge. If you continue with this browser, you may see unexpected results.

Stress-minimising ways to get started with planning, writing and reviewing your work.

What are grammar, punctuation and academic language?

Grammar and punctuation rules describe the essential structural elements of writing. Incorrect use can cause the message of the text to be lost or confused, and will undoubtedly result in a deduction of marks.

Academic language is more formal than the everyday language we use to communicate, but it should still be clear and concise. See the tabs below to learn about ways you can use language to effectively convey your point, and review the Writing Process section of this guide for more information.

Here are a couple of strategies for converting sentences from the passive voice to the active voice:

It is preferable to use the active voice wherever possible because it gives a sense of immediacy and commitment to the sentence.

Active: The dog bit the man. Passive:  The man was bitten by the dog.

Transition, connecting or linking words and phrases ("signposts") tell the reader where the argument is going and what is coming next; essential for indicating flow of logic and argument. As you read you'll notice these signposts guiding the way. Use the list below to find the right word or phrase to connect, transition, or link the points in your writing.

Redundant words are those that repeat a concept within a phrase, and therefore serve no purpose. If you have redundant words in your writing, it is a sign that you need to do some editing.

a total of 98 participants

they were both alike

one and the same

the reason is because

These explain not what the word is, but how it is used.
The below example shows how the same word could be a noun in one sentence and a verb in the next:

Deborah books the tickets for the concert.

Joe waited for the train.   The train was late.

Compound Sentence – contains at least two independent clauses, often joined by a conjunction such as and or but.

Joe waited for the train, but the train was late.

A paragraph is a group of sentences that develop one single idea.

The topic of a paragraph is stated in a single sentence, at the beginning of each new paragraph, and is called the topic sentence.  It introduces the topic and tells what the paragraph is going to be about.

The rest of the paragraph consists of sentences that develop or explain the main idea. 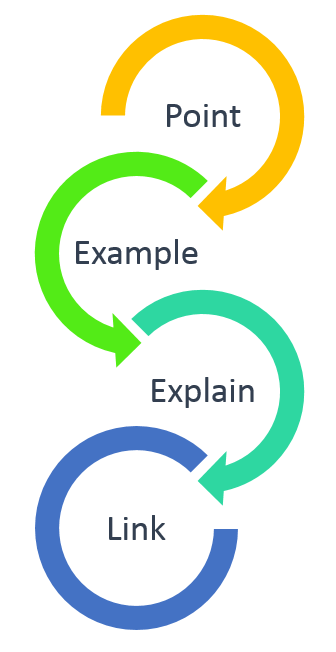 Example
Support it with evidence, research, references, an example, a quote.

Explain
Analyse and comment on the reference/example.  Explain why it works within the context of the essay question and the argument you are currently making.

Link
Link this point to the next point (next paragraph) and to the essay question (main topic).